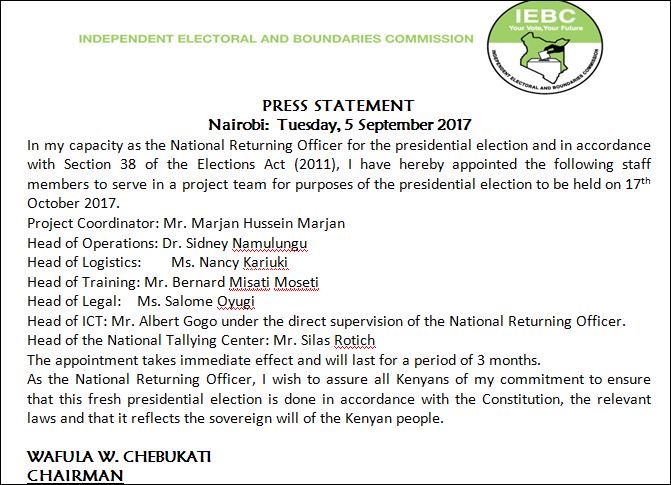 The Independent Electoral and Boundaries Commission IEBC has made changes ahead of repeat presidential election by appointing a seven member team to oversee the 17th October 2017 election.

IEBC is said to have overlooked the constitution, committing various illegalities affecting integrity of polls,according to Chief Justice David Maraga.The supreme court therefore  made a declaration that President Uhuru Kenyatta was not validly declared the president-elect and the declaration by IEBC “is invalid, null and void.”

Also read:Nasa demands for IEBC ahead of fresh elections

Four out of six Supreme Court judges  upheld arguments by the National Super Alliance candidate Raila Odinga that the August 8 presidential election did not meet the constitutional and legal threshold in a bold decision whose reverberations will be felt in the country and the African continent for a long time.

“A declaration is hereby issued that the presidential election held on August 8, 2017, was not conducted in accordance with the Constitution and the applicable law rendering the declared result invalid, null and void,” Chief Justice David Maraga, Deputy Chief Justice Philomena Mwilu, Justice Smokin Wanjala and Justice Isaac Lenaola decreed.

The Chief Justice said that what they read was not a ruling but a court determination, adding that the court would give a comprehensive ruling i n 21 days.