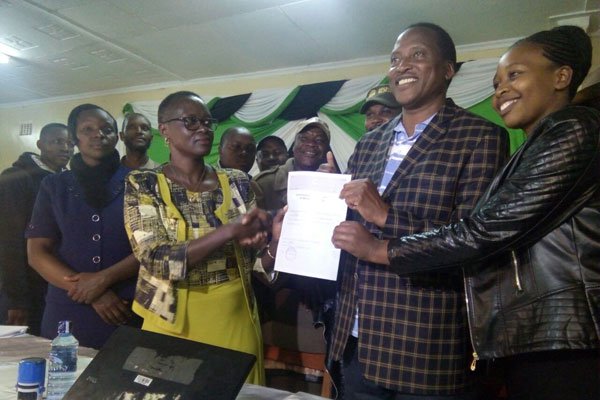 Ford Kenya’s Richard Onyonka has been re-elected to serve for a third term for Kitutu Chache South MP seat.Read Also:Mutahi Kahiga To Be Sworn In Following The Demise Of Nyeri Governor

In a mini-election that was held on Tuesday,Onyonka garnered 10,122 votes while his Jubilee competitor Anthony Kibagendi emerged second with 5,074 votes.

According to the results by the constituency’s Returning Officer Hilda Imbo early today,Omwando at 4am on Wednesday,Samwel Kenani came in third with 4,324 votes while Maubi Andrew Mokaya got 2,191 votes taking the fourth position.See Also:Over 600,000 KCSE Candidates Start 2017 Tests Today

Onyonka’s supporters broke into songs of praise, cheers and jubilation after the results were officially announced at St. Marys Mosocho Girls primary boarding.

Upon the declaration of the results his party leader Moses Wetang’ula who congratulated him saying he needs people like him in parliament to tame Jubilee’s influence.

Voting took place in all the 115 polling stations across the constituency which had 59,017 registered voters but those who turned out to vote were 22,240 representing 37.40 percent.

Even before the results were officially announced, there was jubilation at St Mary’s Mosocho Primary School tallying center after it emerged that Mr Onyoka had taken a commanding lead. 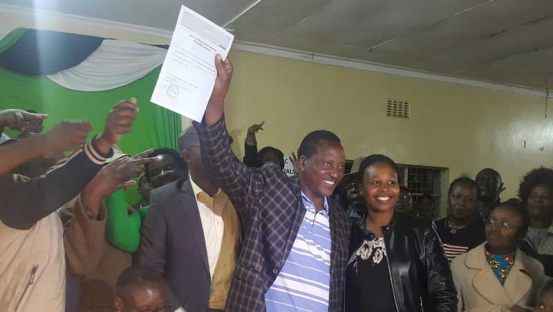 Hundreds of his supporters who had thronged the tallying center broke into song and dance and lifted their MP-elect shoulder high.Se Also:NASA Announces Boycott of Safaricom,Bidco and Brookside

Onyonka addressed his supporters aftre being declared the winner and called his opponents to join hands to ensure excellent services are offered to the residents for the next five years.

The newly elected took after his late father Zachary Onyonka who ruled the constituency from 1962 until his death in 1996.

Onyonka promised to accomplish all development projects that he began in his second term in the office to ensure he leaves a good legacy.

He first engaged himself  in politics after his father passed on prompting a by-election in which he lost.